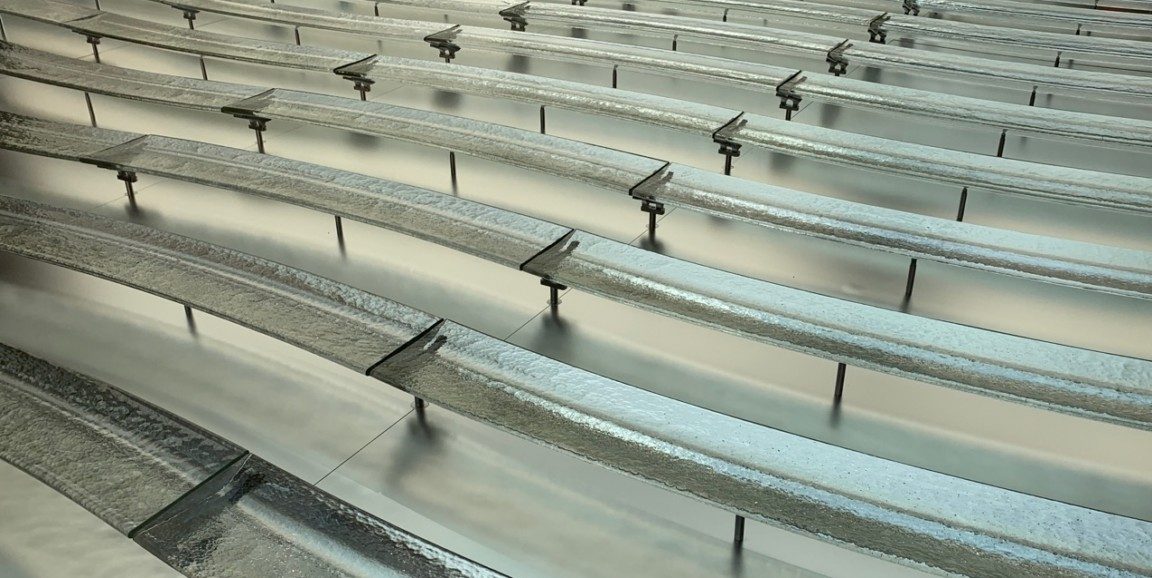 As plans took shape for the new Stanford Hospital, attention turned to the soaring atrium, where thousands of patients, family members and staff would pass through each day. The space needed a focal point -- something that would make the atrium a peaceful yet energizing space, where family members could gather or simply spend a contemplative moment.

Initially, there were thoughts of a fountain, but that idea got nixed because of infection control concerns. The volunteers in charge of selecting the art for the hospital turned to New York sculptor and MacArthur Fellow James Carpenter, who has been captivated by the properties of light and glass for 50 years. They asked him to find a way to convey a sense of water without liquid.

But the new Stanford Hospital is the first health care facility Carpenter has worked on. His team started planning for the project in 2013 and recently completed the installation of Liquid Light.

"We wanted to produce something that had a sense of beauty and a recall of nature and would be rather calming," Carpenter said in an interview. "It's something that can really occupy your thoughts."

Liquid Light is made up of rippled glass prisms designed to resemble a wave pattern moving across the ocean's surface, Carpenter said. To create the prisms, the designer used nearly 100 textured glass planks, roughly three inches thick, made by Oakland glass artist John Lewis, and affixed the glass to small posts on a 30-foot-wide circular metal base. Positioning the glass as if it's floating allows the sun pouring in through the atrium's skylight to reflect off both the glass and the metal, creating different patterns of light and shadows, said Connie Wolf, consulting director of the art program for the new hospital.

"It almost feels like when you throw a penny into a pond; it shimmers and moves and shifts and changes over time," Wolf said. "It's quite stunning and at the same time very calming."

Seen from above, the 30-foot wide glass prisms that make up Liquid Light hover above a metal disc.

Liquid Light is one of seven works of art commissioned for specific areas in the new hospital, all fully underwritten by private donors. It was commissioned by Stanford Health Care with the support of Jill and John Freidenrich and Barbara and Ken Oshman. Others include Rays of Hope, a mural by Korean artist Jinnie Seo in the interfaith chapel, Leo Villareal's spherical Buckyball in the entrance plaza and Ned Kahn's 1,000 pound Air Cube in the garden on the third floor.

Carpenter said he is delighted with the finished product.

"It sets up a quality of serenity and beauty and light for the entire lobby," he said. "When you do a piece and you've envisioned it a certain way and you've never done it exactly like this before, it's always quite exciting to come and see something live up to your expectations and exceed your expectations."

This article was originally published on SCOPE by DAPHNE SASHIN.