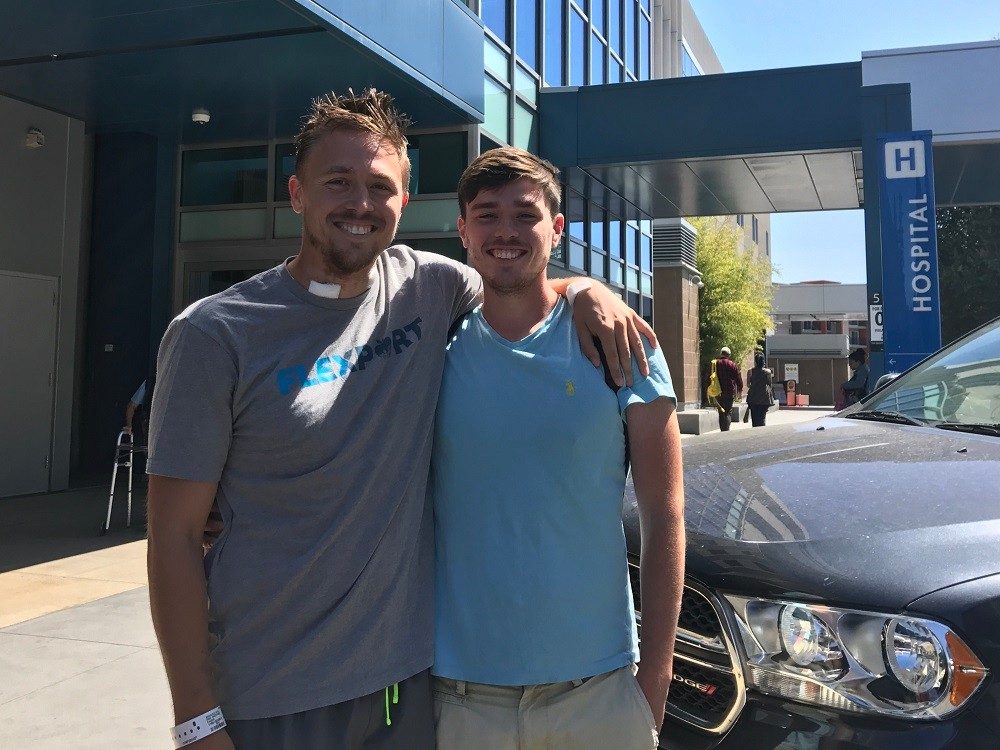 Kyle (left) with his brother on the day he was discharged from the hospital.

The quick thinking of a Stanford-trained physician led to the use of a life-saving technology to save a young man fighting a hantavirus infection.

When Kyle Beaulieu went to Lake Tahoe in July 2017 to participate in a Ragnar Relay race, he expected to come home a bit tired from running 17 miles in a 24-hour period. What he didn’t expect was the near-death experience that ensued less than a month later. Beaulieu is an endurance athlete. He swims, bikes, and runs, sometimes all three at the same event. So when a fever of 103.7 degrees Fahrenheit kicked in on August 17, he went to see his primary-care doctor the next day. All signs pointed to the flu, and he was sent home to rest. Over the next 48 hours, Beaulieu’s fever remained above 102 degrees, and he began experiencing muscle spasms and breathing attacks.

“I rarely get sick, so I just thought the flu was kicking my butt,” the 30-year old said. But after a harrowing night struggling to breathe, his girlfriend took him to the emergency room in Oakland, where he was immediately admitted, placed on oxygen, and tested for a number of conditions. An infectious disease specialist suggested his symptoms and story resembled hantavirus, a rare infection contracted from rodents that causes acute respiratory distress. There is no medication to cure hantavirus, and it is fatal in almost 40 percent of cases, according to the Centers for Disease Control and Prevention (CDC).

Meanwhile, Beaulieu was rapidly collapsing with full respiratory distress. A Stanford-trained physician at the Oakland hospital suggested Beaulieu be transferred to Stanford Health Care, one of only two hospitals in the Bay Area with a life-saving technology called extracorporeal membrane oxygenation (ECMO).

“Essentially, ECMO is a long-term cardiopulmonary bypass machine,” said Joe Hsu, M.D., assistant professor of pulmonary and critical care medicine at Stanford Health Care. “What that means is that even when the heart and the lungs shut down, you’re able to sustain someone’s life. In this case, the machine essentially supported Beaulieu’s initial cardiopulmonary failure while his immune system fought the hantavirus.”

The Stanford Health Care team, which included specialists in pulmonary care, Yasuhiro Shudo, M.D., Ph.D., in cardiothoracic surgery and Shanthi Kappagoda, M.D., M.S., in infectious diseases, chose a vein-to-vein approach to using ECMO. “Usually ECMO for hantavirus cardiopulmonary syndrome is hooked up from vein to artery, so you completely bypass the heart,” said Hsu. “But we opted for vein-to-vein ECMO, which let his lungs completely relax, but utilized his strong heart.” They went with this approach to avoid the heart damage that can sometimes occur during extreme uses of mechanical ventilation.

“Hantavirus is a very serious infection, which can come on very rapidly, within hours,” said Hsu. According to the CDC, there have only been 728 cases of hantavirus ever reported in the United States, with just 50 in California. Initially, physicians caring for Beaulieu suspected he had contracted hantavirus when he stayed in a cabin in Montana that had evidence of a rodent infestation. But Beaulieu later learned that the strain he contracted most closely resembled one found in the Tahoe region.

“They told my family I was one of the sickest people in the hospital at that moment,” said Beaulieu, whose parents flew out from the East Coast once they got the call. “Being on the ECMO machine gave me a fifty-fifty shot.”

Within 24 to 48 hours on ECMO, Beaulieu showed signs of improvement. In just five days, he was taken off the machine, and was discharged a week after he was first admitted to Stanford. “To go from near death to immediately bouncing back was quite impressive,” said Hsu. “It was pretty much the best outcome you could get on ECMO.”

“The use of ECMO is becoming more and more prevalent and prominent,” said William Hiesinger, M.D., assistant professor of cardiothoracic surgery. At Stanford Health Care, the use of ECMO has greatly expanded, from just a handful of cases a decade ago to nearly 80 per year. “The technology has improved and with more experience using the technology, physicians are seeing that it can be applied over a wider variety of disease processes and illnesses,” said Hiesinger. The ideal ECMO patient is somebody who has a one-organ-system injury that’s reversible, he said. This includes patients with an acute lung injury or acute cardiomyopathy.

While on ECMO, Beaulieu was intubated, so he communicated by writing notes. When Hsu told him he had hantavirus and that it was up to his own lungs to fight the disease, Beaulieu scribbled this response: “My lungs are one of the body parts I’ve always trusted most.”

“I’m really lucky to be in this area and that Stanford Health Care was able to accept me,” said Beaulieu, who is back at work full time and starting to exercise again. “Without ECMO, it’s very unlikely that I would have survived. I’m so grateful to everyone at Stanford and the hospital in Oakland for working together on my behalf to arrange the transfer. Even if there had been just a half-day delay, it might have been too late.”

Stanford Infectious Disease Clinic diagnoses and treats patients with any type of infectious ailments and with compromised immune systems.
650-736-5200

Our program offers the newest support devices available to people awaiting heart transplant, or to those unable to receive a transplant.
650-723-5468